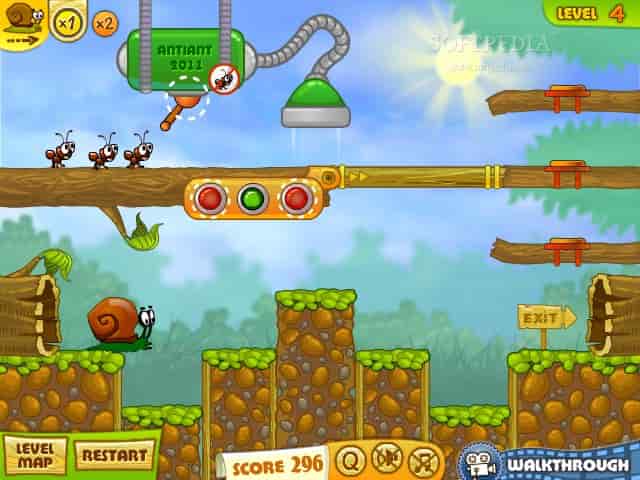 Do you like puzzles or nature? Don’t you admire the beauty of the galaxy? Yes or yes, this game is for people of all ages and sexes. Why? Because the world of snails is a lot of fun and you can learn physics in a fun way. Snail Bob 4 will take you to the world of snails and incredible adventures like flying in space and searching for a new life on the side of an unknown galaxy where you can discover completely new planets and meet unexplored aliens that do not expect you and will probably fight against you, but your job has to be done. This is a whole new level of gameplay in this genre, with new journeys and a completely different storyline from the previous Snail Bob games. The reason for this is surprising. The game developers have created a whole advanced world, with new dark sides of the galaxy and cool design, they have also created new puzzles with precise physics details, and if you don’t know the rules of casual physics, this game will teach you while giving you the most fun.

Main point of the game

It is a kind of modern game where you have to pay attention to every little detail and find a hidden path to pass the next round with extra points and win. Moreover, Snail bob 4 is the new version of this amazing series with new secret stars and many fun toys like lasers and flamethrowers. Snail bob is the main character and he is resting at home at the moment, but the general of his planet’s army calls him and invites him to come back. You must first take Snail bob to the spaceport and then, after the destruction of his ship, help him find a new way home. In this case, you will have to confront the alien warrior and, above all, gravity. To do this, you will have different missions, such as finding a way to cross the death barrier and get all the stars or swap places with other slugs and take him to the safe destination.

The basic story of Snail bob 4 is simple, just like the previous versions, and there is a new interesting and somewhat difficult twist, with a new alien enemy, and you have to fight him for peace on your planet. In this game, fighting doesn’t mean shooting or bashing heads, you have to defeat them with the logical skills of your brain and your wits.

When someone creates such an amazing game as “Snail bob”, it requires a great imagination and a real knowledge of physics. The developers of Snail Bob 4 have done a great job with this task and created an amazing game with great graphics. They made a lot of advanced color textures, beautiful maps with great stuff and added more than 60 completely new locations. The music in this game is so intense that it motivates you to play with joy and fun. It creates a relaxed atmosphere during the game and fits the situation perfectly.

The gameplay of Snail bob 4 was created in consultation with physics engineers, so it is totally modern and simple. But also the control of the character and the map of things, every turn you have to play it differently, and you have to be careful and patient with what you press and when, otherwise you lose your life.

The controls are very simple. Just click on a point to turn it on and click again to turn it off, but this action must be calculated and executed at the right time to get the desired result. For example, if you need to move from one edge to another without touching the surface, you have to turn the gravity field on and off at the right time. Similarly, sometimes you have to click on the leaves of a tree to find a hidden star.