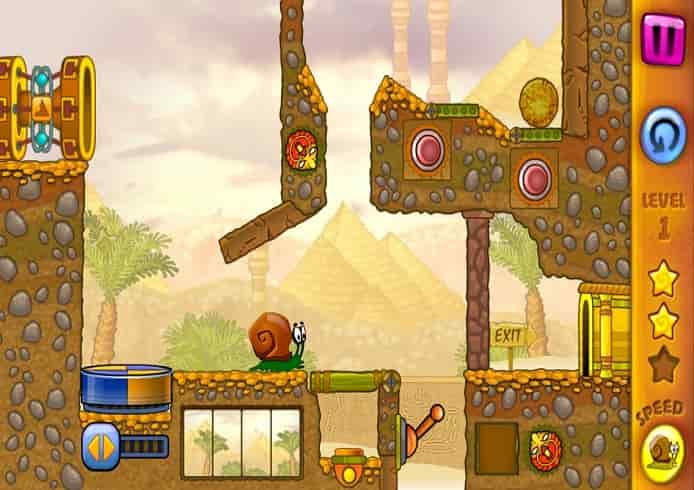 Welcome to the world of Snail Bob! If you’re tired of shooting and running around, this is the game your brain needs to explore. Snail Bob 3 is the new version of the Snail Bob game series, where a whole new world of adventures and puzzles awaits you. Even the previous games had many fun and exciting scenarios that won the hearts of all players, making them famous all over the world. The reason is simple, this series of games has unique plots and scenarios and excellent gameplay that gives you amazing opportunities to manage the slug as you want and burn it if you want.

This game is the most advanced in the modern style of puzzle game and it takes a bit of logic as well as speed skills to win the battle against the hot animals and meanwhile solve such fun puzzle games. On the other hand, Snail Bob 3 is the perfect way to relax and at the same time have fun and entertainment while testing your intelligence in many different ways. It is an advanced and innovative game in its genre and if you think you are smart, you should beat this game because it is so challenging that you will manage to beat giant cats in the hot desert of Egypt.

Snail Bob’s planet was dangerous, and he helped his army general protect it, and they had done the same in the previous game. So their planet is safe, life begins again, and Snail Bob has a new job. He is the new employee of the Snail Planet Museum, and his boss is an ancient snail who shows him a magic circle, and this circle somehow leads Bob to the mysterious places of Egypt. The plot of this game is interesting, as always, you have to solve the mystery of ancient Egypt and Snail Bob returns home safely. In this case, you have to protect yourself from giant cats and deadly lasers. In this version, you also have an ally who helps you find your way through the burning desert. You can create your own clones that will push the buttons for you and do the driving for you. In addition, new missions and maps will give you the opportunity to think and make decisions that will lead you to victory and home.

The controls in this game are simple, as in the previous one, you have to click with the mouse to perform an action and that’s it.

Snail Bob 3 is the latest product of the best puzzle games and features a brand new game engine. Unlike the previous Snail Bob series, in this game you have more challenging and cool objects to use and control your snail. You will have to jump over trampolines and fly over other edges, as well as master perfect timing to turn lasers on and off. Most importantly, in this game you will have to fight against new animals and species.

There are evil spiders that can crush you with big rocks so you have to cut their ropes and also when you have to press buttons and walk at the same time, at that moment you can create your own clone that will commit suicide or jump into the holes for you so you can walk on it and reach the goal, there are many new features and moves like big green frogs that can grab you with their tongues and get a slug from the other side of the map.

The graphics of Snail Bob 3 have been taken to a whole new level, and these new changes make this game the perfect way to relax and kill time while having fun. This game with amazing colors and effects has an amazing ability to get you addicted and have fun. Every thing is so realistic and the animals are so pragmatic. So enjoy this dangerous and unusual world.