The best skins in League of Legends are the ones that catch your eye. Whether it’s a skin with an amazing color scheme, one which changes its look on game length or even one which re-imagines a character entirely, these are some of the most distinctive and well-loved hero designs out there. There is no shortage of compelling options for you to choose from when deciding what to play as next time you log into LoL.

Sion’s revamp was one of Riot’s greatest, despite the fact that it occurred a long time ago.

They enhanced his appearance and made him feel fantastic!

However, if you’re ready to give up some orange essence/RP, you can always make him seem even better.

But, out of all of his skins, which ones should you pick?

That’s the question we’ll be attempting to answer as we rank all of Sion’s skins in order of price, features, and overall attractiveness.

I understand Riot’s motivations for creating this skin.

But it’s a little too bland for my tastes.

Yes, gifting him a Viking helmet and a huge old axe is quite nice. But it’s nothing compared to the other Sion skins.

You also lose his original design option of being resurrected from the dead.

This seems to be your typical big-picked fighter who simply managed to stumble into the Rift.

I’ll add that the design fits in perfectly in your passive shape. But if you really want to be an angry Viking, play Olaf. 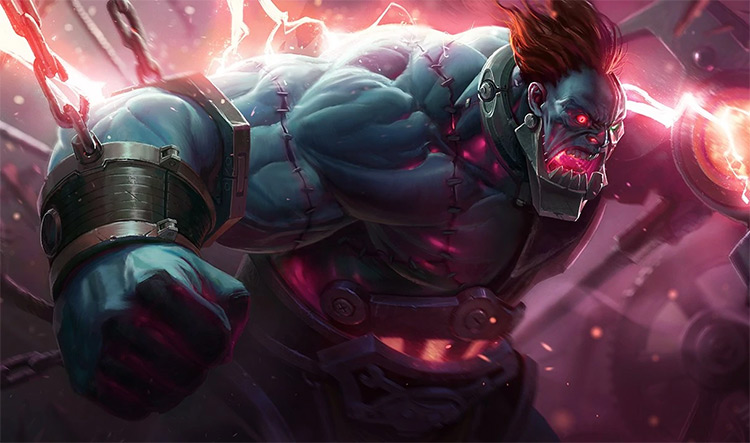 Although this skin isn’t the finest Sion skin available, it does have the right concept.

It’s a fairly steampunk design, with half of Sion’s body made out of antique equipment.

It gets additional points for having his “regular” side stitched up as well.

On the other hand, I’m not a fan of the axe. It resembles a hammer in appearance. And not even in the manner of a nice hammer.

Sion also has alternative skins that dabble with technology and perform even better. So, as far as I’m concerned, this skin doesn’t even qualify for originality points.

I’ll grant it that game has some very amazing splash art. 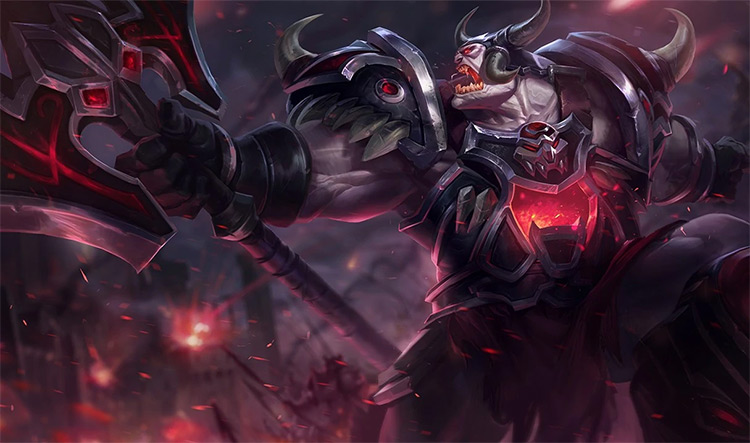 The champion’s armor is so well-designed, with bones and fangs protruding from every nook and cranny. And the black and red patterns have a frightening sense to them.

The axe seems to be distinctive and strong, and the whole character model lives up to the skin’s name.

Warmonger Sion’s pure white skin, although not as torn as the original, still gives off the feeling that he was brought back from the dead, thus I can’t dock points there.

But, despite all of this, the skin only reaches a maximum of “cool.”

Because no new particles or animations have been included, the skin doesn’t have much space to shine. Because the motif of “LoL champion in black armor” isn’t unique to Sion, this skin suffers from a lack of inventiveness.

Overall, it’s a good skin, but it’s not the greatest. 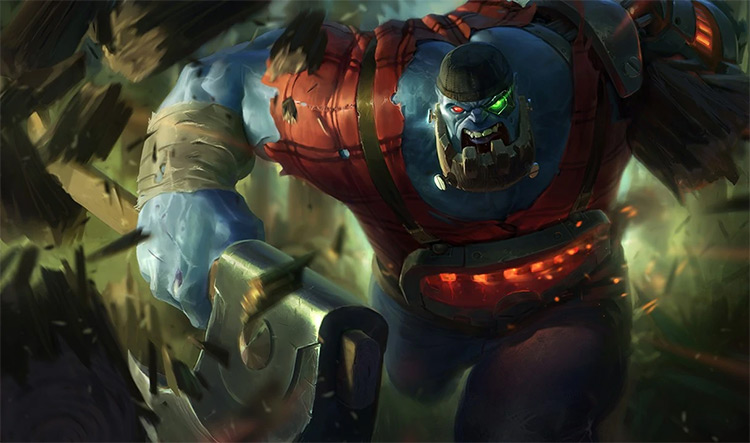 I’m still blown away by how beautiful this skin is.

It has no additional animations and just turns you into a lumberjack. That concludes our discussion.

Despite this, it’s a blast to play, particularly if you go full AD. Lumberjack Sion mains still appreciate this decade-old skin because there’s something innately humorous about kicking somebody in the shin as Lumberjack Sion.

I can honestly say that I understand.

Aside from the fact that he’s a lumberjack, I really like how one of his hands is a furnace. This adds to the original idea by making you seem little more insane and deadly.

The combination of the Terminator eye and beanie adds to the overall charm.

This is the way to go if you want a basic skin that will never go out of style. 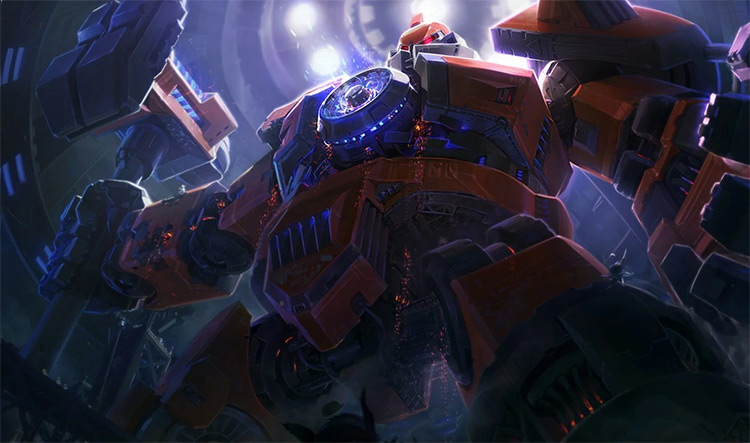 Let’s get the things straight before you start teasing me on Twitter for not ranking this skin first.

In the whole lineup, Mecha Zero Sion has the finest ult animation. That much is undeniable, since who doesn’t want to be a major train conductor?

This skin’s emotes are also fantastic, since you can physically hip thrust dread into your opponents.

The character model and animations for the basic abilities, on the other hand, are not S-tier.

Although I adore Sion’s blue core, the whole form seems to be overly cumbersome. It also looks too much like every other Mecha skin in the game.

The ability animations are similar in that they are boring futuristic particles that are utilized all the time.

Given that this is the most costly skin in the game and only has two S-tier features, I’d argue this isn’t the greatest Sion skin available.

But it’s a close call. 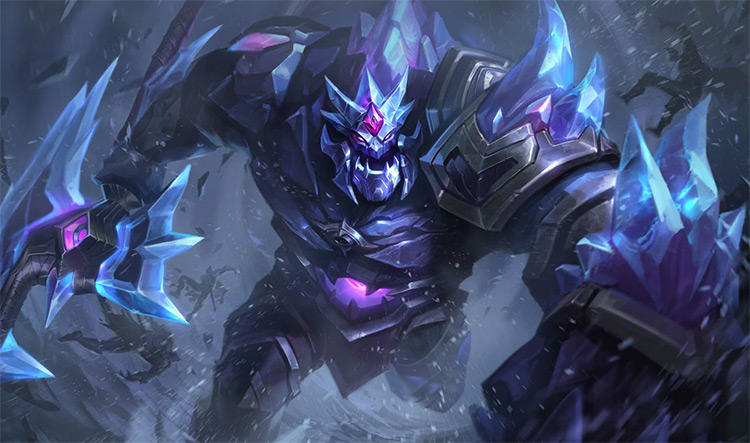 Choosing between this skin and the one after it was a nightmare, but here we are.

Blackfrost Sion is fantastic, and it makes you feel like a god.

Your axe seems to have sliced whole worlds in two. And it’s possible that this is the only skin that may make your E feel significant.

The ice particles surrounding your W also make it seem colder. And the fact that your ult has less sound effects than other skins means that you’re likely to startle a lot of people.

In addition, the new backdrop animation is fantastic. It has a strong “being possessed by my own strength” sense about it.

Your passive shape, meanwhile, seems to be fashioned of the stars themselves.

So, why isn’t this skin the winner?

As I’ve already said, I like it when Sion seems to have been rebuilt in some manner following his death. And this skin, in my opinion, fails to convey that message. 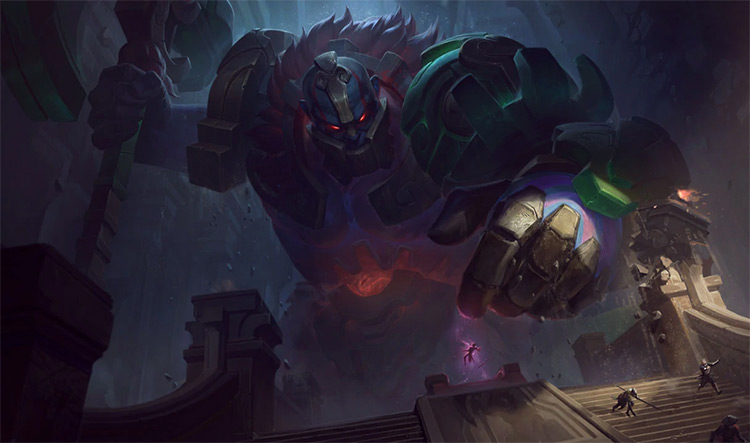 There’s a lot to say here, but first and foremost, that splash image is insane, and it instantly tells you that this person is some ancient entity that, if awoken, may destroy everything.

And the in-game character model does a good job of conveying that message.

Worldbreaker Sion, on the other hand, has a lot of minor elements that stand out:

The fact that one of your shoulders is a cog, as well as the brilliant green stone-like substance on your arm and axe, give you an old and artificial appearance, which is a great bonus in my opinion.

It’s almost as if you’ve been sleeping for thousands of years, just to be awakened to fight a terrible power.

Your backdrop animation has a strong “King Kong” vibe to it, reinforcing the concept that you’re a whole package.

Your passive form is reminiscent of something from the Ruination. This also serves to showcase your dark strength.

In terms of concept and effects, this skin offers everything you could desire for Sion.

Note that this material was made utilizing Riot Games’ “Legal Jibber Jabber” policy and Riot Games’ assets. This project is neither endorsed or sponsored by Riot Games.

The “barbarian sion” is a skin that was released in 2015. It is the best skin for Sion and it has been ranked as one of the best skins in League of Legends history.